Posted by Doug Smith at 7:52 PM No comments: 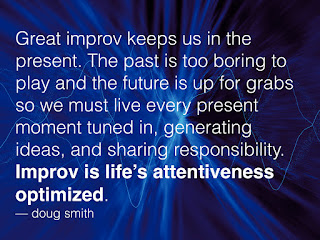 Great improv keeps us in the present. The past is too boring to play and the future is up for grabs so we must live every present moment tuned in, generating ideas, and sharing responsibility. Improv is life's attentiveness optimized.

Posted by Doug Smith at 9:13 PM No comments: 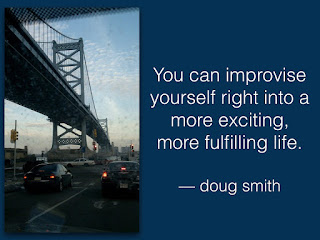 You can improvise yourself right into a more exciting, more fulfilling life.
-- doug smith

Posted by Doug Smith at 9:10 PM No comments: 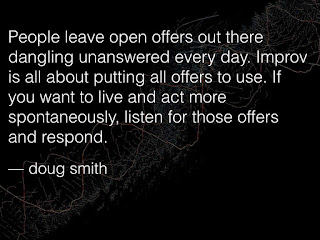 People leave open offers out there dangling unanswered every day. Improv is all about putting all offers to use. If you want to live and act more spontaneously, listen for those offers and respond.
-- doug smith

Posted by Doug Smith at 9:04 PM No comments: 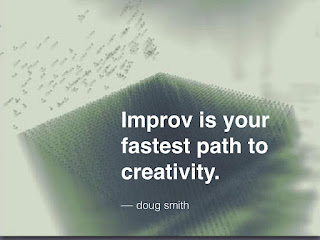 Improv is your fastest path to creativity.
-- doug smith

Posted by Doug Smith at 9:01 PM No comments: 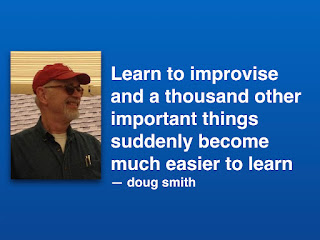 Learn to improvise and a thousand other important things suddenly become much easier to learn.
-- doug smith

Posted by Doug Smith at 8:59 PM No comments: 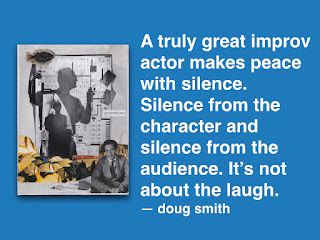 A truly great improv actor makes peace with silence. Silence from the character and silence from the audience. It's not about the laugh.
-- doug smith

Posted by Doug Smith at 8:54 PM No comments:

You could hear the train for a full thirty seconds before it got within range. Anyone interested in their own safety would give it room. 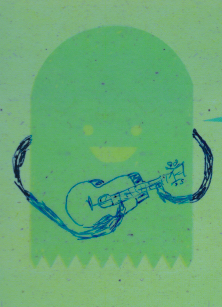 Or, maybe I was overly cautious. My mom filled me with fear saying that a train would suck me right under it and cut off my legs and arms if I got too close. How close is too close? We were nearly too close.

I hear laughter from the band. It was a good night of music and the tips were decent. Plus, the beer was free and flowed plentifully. William even enjoyed a giant marguerita. It took three hours to drink, but there was beer in between. And oh, the sizzling fajitas (which we did pay for) hit the spot.

We played every song we'd rehearsed, and then because they wanted more, we played them all again. We could have gone all Grateful Dead and jammed twenty minutes on two songs, but instead repeated the set. I was ready to improvise new tunes, and we even tried that.

Now the load out and the train. So loud we couldn't even hear Dee's voice (normally audible even in a stadium filled with people) and then it happened. With the train just a few feet away and not slowing for a moment, a bicycle sped across the tracks.

For a moment I saw the rider sucked under the massive train, severed limbs flying in every direction.

"What the hell! Is he crazy?" she said, now perfectly audible for about a mile.

Trains. Bicycles. And we weren't even in Boulder.


Five Minutes: Writing improvisationally without filters for five minutes and then stopping. Then, perhaps, finding a random image to go with it.
Posted by Doug Smith at 11:12 PM No comments:

"Improvisation is an effective means of creating a situation in which genuine play takes place and also provides a way of understanding our complex lives."
-- Kenneth Pickering, Drama Improvised, p.45 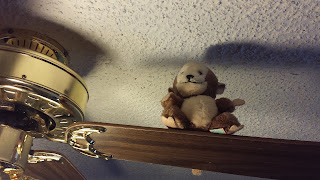 Affirmations are a useful development tool in many fields. Positive phrases that affirm your instant ability to be who you want to be and to do what you want to do contribute to building your success by framing your expectations, boosting your confidence, and lighting up parts of your brain that bring about the very success you are picturing.

Here are some improv affirmations to help you develop your improvisation skills, creativity, and sense of artistic play:

Trying a few affirmations each day is like stretching your body before exercising, or tuning your instrument before performing. It is a great and useful warm-up that enhances your performance and attitude. Go ahead, you can do it! 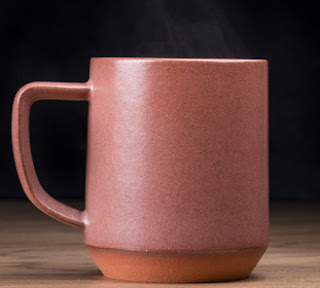