The clown convention disbanded without a sound.

Rows and rows of too big shoes sat in the street, surrounding the mailbox as if they'd tried half-heartedly to send themselves home. The clowns were nowhere to be found.

After a few minutes the whole thing felt like a mirage. Were there ever any clowns at all? Who had the power to clear the town out so quickly? Consider this: clowns, maligned as they are and misunderstood in part by their own design and in part because, well, who really understands the impulse to paint your face white and make your features look distorted? All to juggle? All to ride a tiny bike?

They were going to visit, surround, transform, redefine the Corn Palace. Corny at last. But the ayes didn't have it and neither did the clowns, so there's no reason for you to take it, either. Instead, let's just ride away. 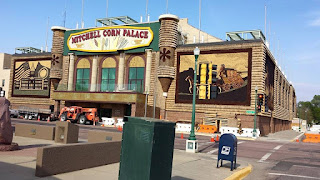 Posted by Doug Smith at 7:36 PM No comments: