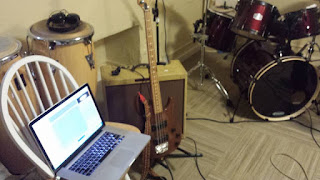 It was loud enough to hear, but not so loud that you called the police. Unless you were overly sensitive.

You're not overly-sensitive, are you?

I was once. Well, maybe a bunch of times. Probably most of the time. But, I got over it.

I'm working on getting over it. I've started to get over it.

The conga drums are gone. I hardly ever played them. I did cart them from Warminster to Colorado and they did survive the fire and they did live for a time in William's basement, where we occasionally (but not often enough) used them. It wasn't a salsa band. We didn't play any salsa. We ate salsa at the Mexican restaurant where we played in Louisville. But we didn't bring the conga drums for that. Guess that was a miss, eh?

William is a fine guitar play and he was an even better friend. Colorado. Seems like the distant past now, and I'm still fundamentally alone.

But I've got my guitar. And my bass. The bass is in a case. The guitar is in my hands.

The future is in our hands...the past? Gone.

1. Find a random image2. Write for five minutes only, inspired by that image.
Posted by Doug Smith at 11:29 AM No comments: