Picture This: Another 2065 Night of Clarity 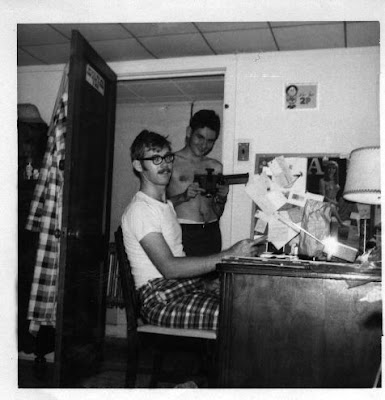 Tom stood in the hallway, up late as usual.

"The desk could be on the other side of the room."
"You're thinking of the future, not now."
"You honor me to think that I'm thinking at all."
"Do you think so?"
"It's commendable that you seem to be studying."
"Seem to?"
"You're not, right?"
"Of course I am. For all posterity."
"For all posterity." 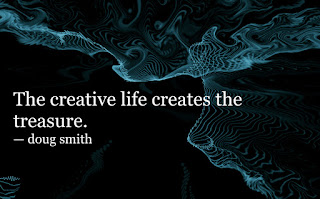 The creative life creates the treasure.

Five Minutes: The Parade at the Hub

She spilled her hot coffee right in my lap. I didn't know if I was more angry or more in pain. She'd been balancing a full arm load of books, her phone, and her hot coffee. Oh, if only the phone had landed in my lap.

"Oops, sorry..." she said, as if she'd tapped my shoe with her toe.
"What the heck! Are you kidding me?" I think I said, although it might well have been peppered with some saucy language often heard in a commercial kitchen or volunteer fire house. I was not please. She kept on walking.

The coffee, about half escaped and half still in her cup, caused me to jump up and though I had nothing to spill, my journal did hit the floor and tear the page I was writing on. Stream of consciousness meet scream of coffee. 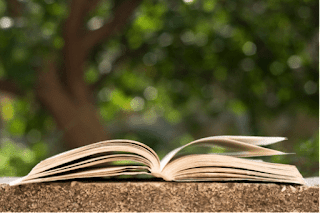 She kept on walking, still holding half a cup of coffee and whatever important information was displaying on her phone.

Coffee. It's so much better to drink it than to spill it.

Posted by Doug Smith at 3:08 PM No comments: 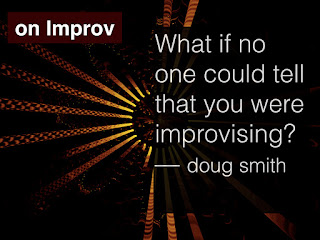 The trouble with bad improv is that it looks fake. Maybe the actors are having fun -- they're certainly getting bigger and bigger with their broad attempts at humor -- but it makes me squirm when I see someone acting. Obviously, acting in ways that say "isn't this funny?" and "aren't we all cool?"

That's asking a lot from improv, which is why it's so rare. But what if you delivered at that level? What if we each took our improv to a level that is even with the best acting available?

What if no one could tell that you were improvising?

Wouldn't that be amazing?

Posted by Doug Smith at 2:23 PM No comments:

Workshop: Improv for Everyone! 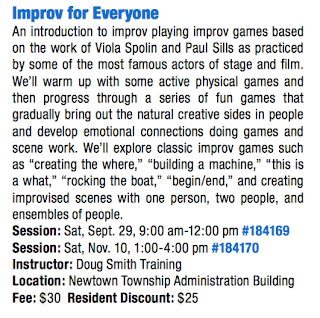 If you're in or near Bucks County, PA, here is a great chance to explore and practice improv.

Do Not Go For The Laugh 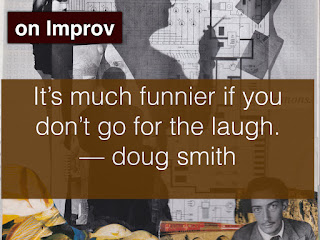 It's much funnier if you don't go for the laugh.

Posted by Doug Smith at 5:38 PM No comments: 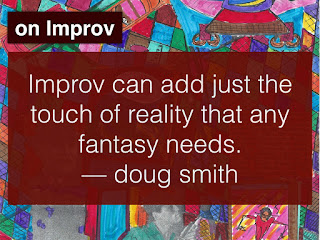 Done right, done real, improv adds reality to a scene and to a performance. Responding in time by building on the ideas of the other performers, rather than trying to steal the show with an impressive show of your own skills - can turn even the most preposterous of pretexts into great texts, great moments, real-feeling moments of artistic joy.

Improvising in collaboration, egos aside, serving the scene.

Improv can add just the touch of reality that any fantasy needs. 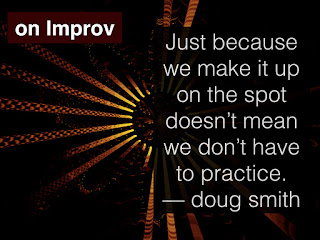 Improv, while spontaneous, is also a discipline. It takes practice. Going for the obvious jokes is so common because people don't practice enough to get beyond them. It reminds me of a technique one improv company used to do in their warm up - they'd say all the cuss words they could think of just to get it out of their system. It's not an easy laugh, it's a tedious gratuitous string of cuss words unless it is all attached to character.

Just because we make it up on the spot doesn't mean we don't have to practice. 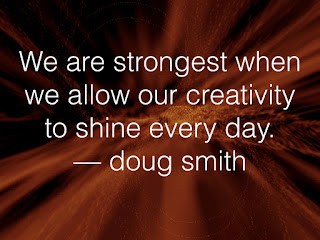 We are strongest when we allow our creativity to shine every day.
-- doug smith

Posted by Doug Smith at 8:18 PM No comments: 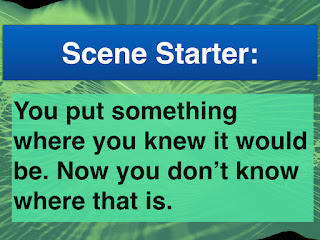 You put something where you knew it would be. Now you don't know where that is.

Posted by Doug Smith at 8:15 PM No comments: 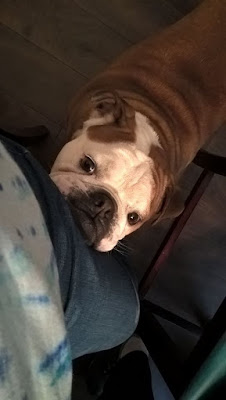 Can anyone really say yes better than a dog? Hardly.

My dog friend (one of a few) Mr. Tubs is a champion say yes kind of guy, and he insists that I play just as unconditionally. When I enter my friend Judi's house, Tubs comes running to see who it is. When he sees who it is (me!) he retreats to find his favorite toy of the moment and trots to me with the offer to play.

If I say "not now, Tubbers..." he remains on point, ready to go, slobbering with anticipation, unable to conceive of a negative thought between me and yes. Say yes.

Improv actors say yes. If you forget how, please...play with a dog.

Say yes to your improv partners. 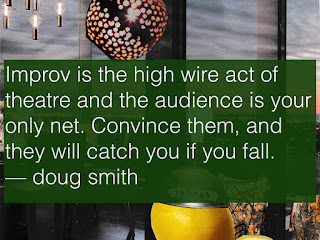 Improv is the high wire act of theatre and the audience is your only net. Convince them, and they will catch you if you fall. 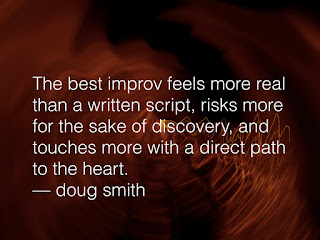 The best improv feels more real than a written script, risks more for the sake of discovery, and touches more with a direct path to the heart.
-- doug smith

I sat in the back of the church, in what was now her office but was once the crying room, the place where people could be in church with their crying babies but be behind a glass wall. It was her office now. Not much need for a crying room. The church didn't see many babies these days. Mostly the few people who attended had gray hair. Or no hair. They walked slowly. And if they cried, it was oh so quietly.

They did cry. Quietly.

The minister was soft spoken. A kind man. A decent enough speaker but the rare paster who was truly a minister to the people and not an ego driven speaker. But he wasn't here. It's Tuesday. A parade of hopeful teens were getting their voice lessons, hoping to be on American Idol or some other talent show. Hoping to get into the high school musical. Hoping to set the world on fire and be famous.

They didn't know the odds were slim and...to their parent's delight the voice teacher had a rep. She had a track record. She was more than a miracle worker, she was a winner's coach. Some of her students really did go on to stardom. Beauty pageant winner. Broadway star. TV personality. Her patience, her persistence, her insistence drove these young people to ride their own enthusiasm ever upward. There was just one thing everyone needed to do more of. Much more. Much, much more:  practice.

"I know you didn't come here to pay me to watch you practice," she said, cheerful and resolved and not at all angry. Her patience was unending. "So maybe you'd like to practice more this week between lessons, sweetie..."

She called everyone sweetie. Or dear. I asked her to call me something else, something she didn't call anyone else, so she called me Honey. And then, soon enough, she started calling everyone Honey. 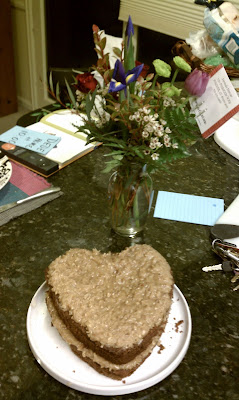 1. Write for exactly five minutes, then stop.
2. Find a random image to add

Posted by Doug Smith at 8:51 PM No comments: 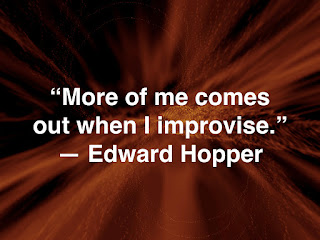 "More of me comes out when I improvise."
-- Edward Hopper


Think about a time when you had to improvise during an unexpected occurrence. Wild, eh? Now for two minutes list all the good that came of that improvising situation.

Five Minutes: There Is No Monologue

She got up to the front of the stage, ready to start her monologue. The lights were brighter than usual with a random slide show slightly illuminating the audience. It was a small crowd, probably no more than fifteen people. They seemed attentive and not yet drunk enough to get loud. Maybe she could pull this off.

What's up with the slides, though? She did not expect this. Maybe she should extemporaneously comment about the slides. What were they about. But no, it was time to start her monologue.

She faced the audience, at least half of which was more focused on other things. She'd better take focus NOW.

I will need two random words from the audience to begin.

She boldly selected: "Dinosaur Sex" she said. That will be the topic of my monologue.

"Sounds like a winner," said an audience member, a man about 25 who was just getting his buzz on.

"So ends the audience participation portion of this monologue," she said, not at all nervous but not at all focused. What were the two words?

"There is no monologue," said the buzzing guy's date. She seemed more buzzed than him. "And you forgot your two words, didn't you?"

How could she admit it?  She did. 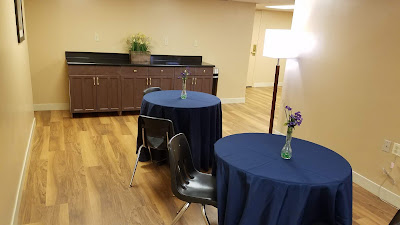 1. Write for exactly five minutes, then stop.
2. Find a random image to add 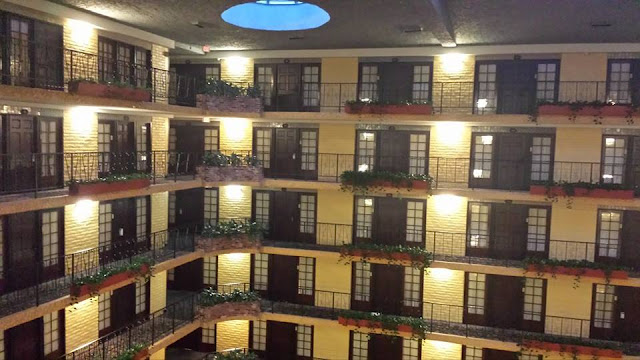 1. Display the picture
2. Start the scene

You can also use this as a Picture This Prompt: 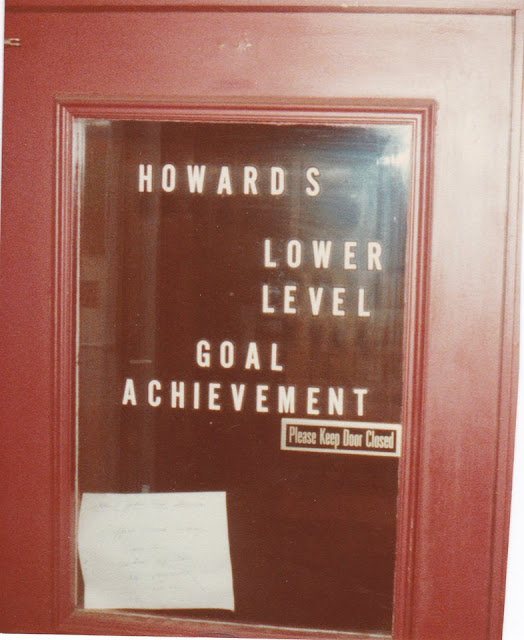 Stop Trying To Be Funny 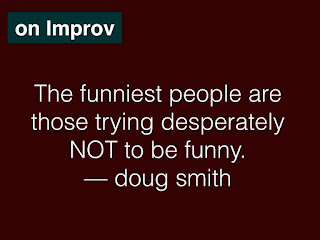 You can always tell someone who is still new to improv: they try desperately to be funny. They go for the laugh. They do outrageous things. They try to tell jokes.

The trouble with doing all that, besides it NOT being funny, is that it's really hard to do that and listen to what your fellow performers are also doing. To build on the work of others you've got to listen, to pay attention, to accept and build on what they're doing. Involving yourself by writing an elaborate script will feel more like a wall between you and the audience, leaving nothing but cheap gags to try to rescue it. Cheap gags will not rescue you.

The funniest people are those trying desperately NOT to be funny. They live thru stuff that would aggravate us but on someone else it seems oddly funny. Every act, every nuance, every pause and every word works to avoid the situation that strikes us as funny. Not to be funny, but to escape the humor. And that is funny.

The next time you catch yourself trying to be funny, convert that to a reaction of what your character would really do in an attempt to avoid the absurdity. That will be much funnier, and feel better, too. 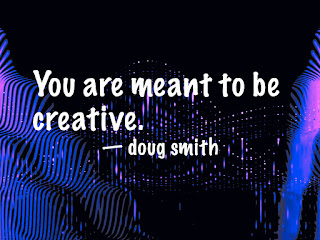 You are meant to be creative.
-- doug smith